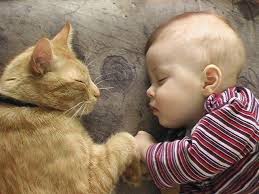 Do not allow closed doors in any room.
To get door opened, stand on hind legs and hammer with forepaws.
Once door is opened, it is not necessary to use it.
After you have ordered an “outside” door opened, stand halfway in and out and think about several things.
This is particularly important during very cold weather, rain, snow, or mosquito season. Swinging doors are to be avoided at all costs.

If you have to throw up, get to a chair quickly.
If you cannot manage in time, get to an Oriental rug. If there is no Oriental rug, shag is good. When throwing up on the carpet, make sure you back up so that it is as long as the human’s bare foot.

Always accompany guests to the bathroom.
It is not necessary to do anything . . . just sit and stare.

If one of your humans is engaged in some close activity and the other is idle, stay with the busy one. This is called “helping”, otherwise known as “hampering.”
Following are the rules for “hampering”:
* When supervising cooking, sit just behind the left heel of the cook. You cannot be seen and thereby stand a better chance of being stepped on and then picked up and comforted. * 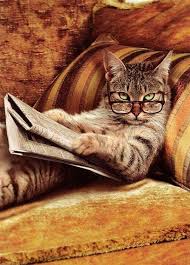 Get in close under the chin, between eyes and book, unless you can lie across the book itself. * For knitting projects or paperwork, lie on the work in the most appropriate manner so as to obscure as much of the work or at least the most important part. Pretend to doze, but every so often reach out and slap the pencil or knitting needles. The worker may try to distract you; ignore it. Remember, the aim is to hamper work.
Embroidery and needlepoint projects make great hammocks in spite of what the humans may tell you. * For people paying bills (monthly activity) or working on income taxes or Christmas cards (annual activity), keep in mind the aim-to hamper!

First, sit on the paper being worked on. When dislodged, watch sadly from the side of the table.
When activity proceeds nicely, roll around on the papers, scattering them to the best of your ability.
After being removed for the second time, push pens, pencils, and erasers off the table, one at a time.
hen a human is holding the newspaper in front of him/her, be sure to jump on the back of the paper. They love to jump.

As often as possible, dart quickly and as close as possible in front of the human, especially on stairs, when they have something in their arms, in the dark, and when they first get up in the morning. This will help their coordination skills.

Always sleep on the human at night so s/he cannot move around. Play This is an important part of your life. Get enough sleep in the daytime so you are fresh for your nocturnal games.
Below are listed several favorite cat games that you can play. It is important, though, to maintain one’s dignity at all times. If you should have an accident during play, such as falling off a chair, immediately wash a part of your body as if to say “I meant to do that!” It fools those humans every time.

* Catch Mouse
The humans would have you believe that those lumps under the covers are their feet and hands. They are lying.
They are actually Bed Mice, rumored to be the most delicious of all the mice in the world, though no cat has ever been able to catch one. Rumor also has it that only the most ferocious attack can stun them long enough for you to dive under the covers to get them.
Maybe YOU can be the first to taste the Bed Mouse!
* King of the Hill
This game must be played with at least one other cat. The more, the merrier! One or both of the sleeping humans is Hill 303 which must be defended at all costs from the other cat(s). Anything goes.
This game allows for the development of unusual tactics as one must take the unstable playing theater into account.
Warning: Playing either of these games to excess will result in expulsion from the bed and possibly from the bedroom.
Should the humans grow restless, immediately begin purring and cuddle up to them.

This should buy you some time until they fall asleep again. If one happens to be on a human when this occurs, this cat wins the round of King of the Hill.
Toys
Any small item is a potential toy. If a human tries to confiscate it, this means that it is a good toy.
Run with it under the bed. Look suitably outraged when the human grabs you and takes it away.
Always watch where it is put so you can steal it later.
Two reliable sources of toys are dresser tops and wastebaskets.
There are several types of cat toys. 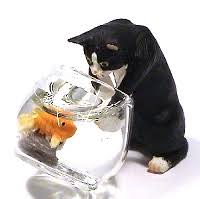 *Bright shiny things
like keys, brooches, or coins should be hidden so that the other cat(s) or humans can’t play with them.
They are generally good for playing hockey with on uncarpeted floors.
Dangly and/or string-like things
such as shoelaces, cords, gold chains, and dental floss (& Q-tips) also make excellent toys.
They are favorites of humans who like to drag them across the floor for us to pounce on.
* When a string is dragged under a newspaper or throw rug, it magically becomes the Paper/Rug Mouse and should be killed at all costs. Take care, though. Humans are sneaky and will try to make you lose your dignity.
Paper Bags
Within paper bags dwell the bag mice. They are small and camouflaged to be the same color as the bag, so they are hard to see.
But you can easily hear the crinkling noises they make as they scurry around the bag.
Anything, up to and including shredding the bag, can be done to kill them.
Note: any other cat you may find in a bag hunting for bag mice is fair game for a sneak attack, which will usually result in a great Tag-match.
Food
In order to get the energy to sleep, play, and hamper, a cat must eat. Eating, however, is only half the fun.
The other half is getting the food.
Cats have two ways to obtain food: convincing a human you are starving to death and must be fed now; and hunting for it oneself.
The following are guidelines for getting fed:
* When the humans are eating, make sure you leave the tip of your tail in their dishes when they are not looking.
* Never eat food from your own bowl if you can steal some from the table.
*Never drink from your own water bowl if a human’s glass is full enough to drink from.
* Should you catch something of your own outside, it is only polite to offer it to the humans first. Be insistent.
* Table scraps
are delicacies with which the humans are unfortunately unwilling to readily part.
It is beneath the dignity of a cat to beg outright for food as lower forms of life such as dogs will, but several techniques exist for ensuring that the humans don’t forget you exist.
These include, but are not limited to:
jumping onto the lap of the “softest” human and purring loudly;
lying down in the doorway between the dining room and the kitchen;
the “direct stare”,;
and twining around people’s legs as they sit and eat while meowing plaintively.

As mentioned above, in order to have enough energy for playing, a cat must get plenty of sleep. 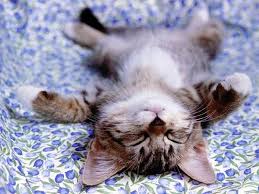 It is generally not difficult to find a comfortable place to curl up. Any place a human likes to sit is good, especially if it contrasts with your fur color.
If it’s in a sunbeam or near a heating duct or radiator, so much the better. O
f course, good places also exist outdoors, but have the disadvantages of being seasonal and dependent on current and previous weather conditions such as rain.
Open windows are a good compromise.
Scratching Posts
It is advised that cats use any scratching post the humans may provide. They are very protective of what they think is their property and will object strongly if they catch you sharpening your claws on it.
Being sneaky and doing it when they aren’t around won’t help, as they are very observant.
If you are an outdoor kitty, trees are good. Sharpening your claws on a human is not recommended.

Humans
Humans have three primary functions:
to feed us, to play with and give attention to us, and to clean the litter box.
It is important to maintain one’s dignity when around humans so that they will not forget who is the master of the house.
Humans need to know basic rules. They can be taught if you start early and are consistent.
Cats as Humanitarians
Humans have a very tenuous hold on reality and it is up to the cats to help them maintain their grasp on said reality. For instance, humans often speak to imaginary friends while holding a small object up to their ear, with no other humans in sight, obviously losing touch with the real world!
A cat must put a stop to this as quickly as possible!
Climb on the human and get your face right up in theirs and meow very loudly until the human acknowledges you, therefore bringing them back to reality.
If that fails, you can use the top of your head to try and knock the small object out of their hand/away from their ear, which almost always succeeds in stopping their talking to thin air.
Human Inconsistency
Humans spend many hours sitting in front of a box with moving pictures, tapping tiny squares on a board with their fingertips…it is rumored that this is actually how humans sharpen their claws!
Considering how sanctimonious they are when they catch cats sharpening their claws, humans obviously need a lesson in consistency. One of the best ways to do this is to walk on the board with the tiny squares…that will always get a huge reaction from the human, a good indication that you’re actually teaching them something! If that doesn’t work, lay on the board or throw up a furball on it! There’s no good reason why humans should be allowed to sharpen their claws while forbidding cats to do so!
Cat Speak
Humans will sometimes try to speak in cat language, attempting to ‘meow’ at you while having no real idea what they’re saying! Cats can either meow back and try and fool the human into thinking that there is a real connection going on, or they can stare at the human with a puzzled look on their face…after all, the human just told you that your mother was the whore of every tomcat in town! Did they mean that or did they simply not understand the implications of their attempting to meow?
It’s hard to say, as the level of human advancement in this area is very limited…about the only ‘catspeak’ they actually understand is “I’m starving” and “Let me out…NOW!”
If they have truly insulted you or your family, feel free to either tell them how stupid they are in cat language or walk away indignantly.
The Eternal Question
When faced with the age-old question, “Is it love, or is it Fancy Feast?”, we all know that it is Fancy Feast, of course. However, it is absolutely crucial that cats not let the humans know this, or the humans might stop sharing this treat with us!
Always convince the human that your sudden, intense attention showered on them is LOVE! You can go back to normal behavior after the treat has been consumed!