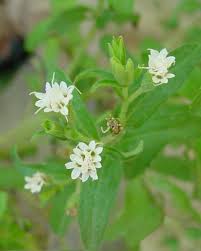 I have come to learn, over the years, that where “authorities” are trashing a product, it’s well worth looking into and usually proves to be of value to humankind!    Here’s just such an example!

The humble and wonderful STEVIA.  From Mama Nature herself!   Here’s to a healthily sweet future!   Yvonne :o)

If you’ve ever tasted stevia, you know it’s extremely sweet. In fact, this remarkable noncaloric herb, native to Paraguay, has been used as a sweetener and flavor enhancer for centuries. But this innocuous-looking plant has also been a focal point of intrigue in the United States in recent years because of actions by the  U.S. Food and Drug Administration.

The subject of searches and seizures, trade complaints and embargoes on importation, stevia has been handled at times by the FDA as if it were an illegal drug.

Since the passage of the Dietary Supplement Health and Education Act (DSHEA), stevia can be sold legally in the United States, but only as a “dietary supplement.”  Even so, it can be found in many forms in most health-food stores, and is also incorporated into drinks, teas and other items (all labeled as “dietary supplements”).  It cannot, however, be called a “sweetener” or even referred to as “sweet.”  To do so would render the product “adulterated,” according to the FDA, and make it again subject to seizure.

The purpose of this site is to provide as much information about stevia as possible, from the scientific studies regarding its safety to the petitions submitted by the Lipton Tea Company and the American Herbal Products Association.

Whether in dry-leaf or concentrate form, stevia has the wonderful ability to help the body regulate blood sugar. Several researchers have reported that, in these natural forms, stevia seems to correct both high and low blood sugar. Other scientists have stated that stevia appears to lower blood pressure, but does not seem to affect normal blood pressure. Stevia leaves and the water-based concentrate are sold in some South American countries as aids for people with diabetes, hypoglycemia and high blood pressure.

Research has demonstrated that stevia liquid concentrate inhibits the growth and reproduction of harmful bacteria and other infectious organisms, including those that are a problem for the food and cosmetic industries. Stevia also inhibits the growth of the bacteria that cause gum disease and tooth decay, and in many countries it is used in oral-hygiene products. Because such products are not yet allowd by the FDA, many Americans simply add several drops of stevia concentrate to a small amount of water, swish thoroughly in the mouth and swallow. This ability of stevia to destroy infectious organisms may help explain why stevia users report a lower incidence of colds and flu.

Less known, but no less remarkable, is the ability of water-based stevia concentrate to help heal numerous skin problems, including acne, seborrhea, dermatitis and exzema. It also has been observed that placing it in cuts and wounds brings more rapid healing without the scarring. This will cause a severe stinging for several seconds, but is followed by a significant lowering of pain. Physicians have reported using stevia concentrate to heal psoriasis and burns, while others have reported that it is extremely helpful in healing various lip sores.