Chamomile in your garden

Chamomile is no ordinary daisy..

Chamomile has been used as a traditional medicine for thousands of years.  Chamomile is part of the Asteraceae plant family, which also ragweed and chrysanthemum belong.

There are two plants known as chamomile: German chamomile is an annual, and it grows in a bushy shrub up to 3 feet tall. Roman chamomile is a perennial that only gets about a foot high and tends to grow along the ground. Both will produce very similar aromatic blossoms, it is German chamomile that is the more commonly grown for its blossoms.  Grow in an area that receives full sun,  consider growing this herb in a container either indoors or on a patio.

Chamomile is known as the “plant doctor,” chamomile has been known to revive and revitalize plants growing near it.
Give your plants a boost with chamomile tea. Soak a cupful or fresh or dried blossoms in cold water for a day or two, strain and spray it on any plant that looks weak or sickly for a pick-me-up. Add leftover tea on the compost pile as it is well known to jump-start compost.

Plant it throughout the garden, it attracts Hoverflies and predatory wasps that feed off of the larvae of harmful garden pests. Chamomile is especially useful in combating pests such as squash bugs and cabbage moths as the wasps it attracts will kill the pests’ larvae. Plant chamomile as a companion helping to bring potassium, sulfur, and calcium to the surface of the soil. 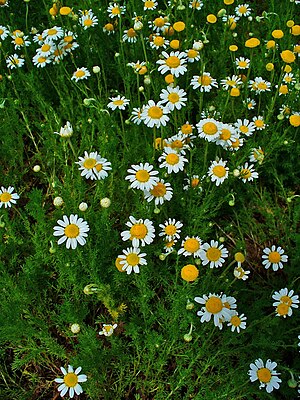 Chamomile has been widely used by children and adults for thousands of years for a variety of health conditions. Today, chamomile is used as a remedy for sleeplessness, anxiety, excema, gingivitis, colic, upset stomach, gas and diarrhea and more. The flowering tops of the chamomile plant are used to make teas, liquid extracts, capsules, or tablets. Chamomile can also be applied to the skin as a cream or an ointment, or used as a mouth rinse. T he active ingredient in chamomile essential oil is known as bisabolol, which has a number of anti-irritant, anti-inflammatory, and anti-microbial properties. Potential side effects of chamomile include drowsiness and allergic reactions from those that suffer allergies from other plants in the daisy family. Not recommended for pregnant woman.
(Please consult a medical professional and or, do your own research prior to use)

Reducing Dark Circles Around Eyes
Chamomile tea has been known to help relieve eye fatigue and dark circles. A simple remedy is to steep 2 chamomile tea bags in hot water, when cooled to room temperature  remove the tea bags from the water and place them on your eyes at night as a compress.