content_copy Autism and its relation to heavy metals - Eco-Earth shop

Autism and its relation to heavy metals 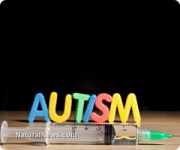 Autistic children have more toxic metals in their blood

(NaturalNews) New evidence suggests that heavy metal exposure may be a cause of autism, in a study conducted by researchers from Arizona State University and published in the journal Biological Trace Element Research.

Autism is a neurological disorder that causes repetitive or restricted behavior and trouble with communication and social interaction. According to theCenters for Disease Control and Prevention (CDC), it affects one in every 252 girls and one in every 54 boys in the United States. Although mainstream medicine long considered autism to be a hereditary disorder, increasing evidence is emerging that link the condition to various environmental factors, such as toxic exposure.

“Studies such as this improve our understanding,” said Caroline Hattersley of the UK-based National Autism Society. Further studies should be performed to back up this research, she said.

The researchers tested blood and urinary levels of various toxic heavy metals in 99 children between the ages of five and 15. 55 of the children had autism, while 44 did not. The groups were similar in age and gender distributions.

All four of these metals have previously been linked with impaired brain function and development, the researchers noted, and can be toxic to other organ systems as well.

Based on three separate scales of autism severity, the researchers also found that higher blood levels of toxic metals were associated with more severe cases of autism. In fact, between 38 and 47 percent of all variation in autism severity could be explained by varying heavy metal levels, particularly cadmium and mercury. This made toxic metal burden the single “strongest factor” predicting severity, the researchers said.

On one level, the findings come as no surprise, given the well-established neurotoxic effects of heavy metal exposure.

“We knew that exposure to lead makes people lose IQ points, and clearly it can induce autism,” lead researcher James Adams said. “The study also showed that people with the highest levels are least able to excrete them.”

The findings may have real-world implications for both preventing and treating autism, however.

Adams has previously conducted research into the effectiveness of DMSA, a drug designed to remove toxic metals from the body. The study concluded that DMSA did indeed remove some metals successfully, and also reduced some symptoms of autism. Autistic children with the highest urine levels of metals benefited from the treatment the most.